Three main efforts in April, plus one do-over. I woke up one morning in a whimsical frame of mind and produced a pair of cheerful, folksy ‘squares’, both of which were chosen to be in the May collage show at the SFWA gallery.They are called “Dreams of Spring” #1 and #2. 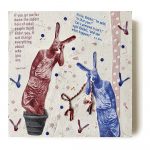 Another even more whimsical piece was “Hairbrained Meditation” which was purchased the day I completed it! Here’s what it looks like: 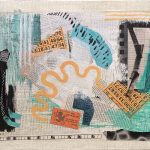 I also created a companion piece to “Wish You Were Here” – same palette, no similarity in theme, but hanging together and looking like a ‘set’. This one is called “Pastimes”, and has bits of game memorabilia from Scrabble, Dominoes, Monopoly and Bingo.

The Do-Over (third and final time!) was “I Read the News Today Oh Boy” which first transformed completely and then finally became a square which made all the difference. This one is for keeps: 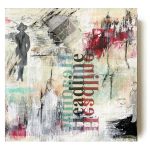